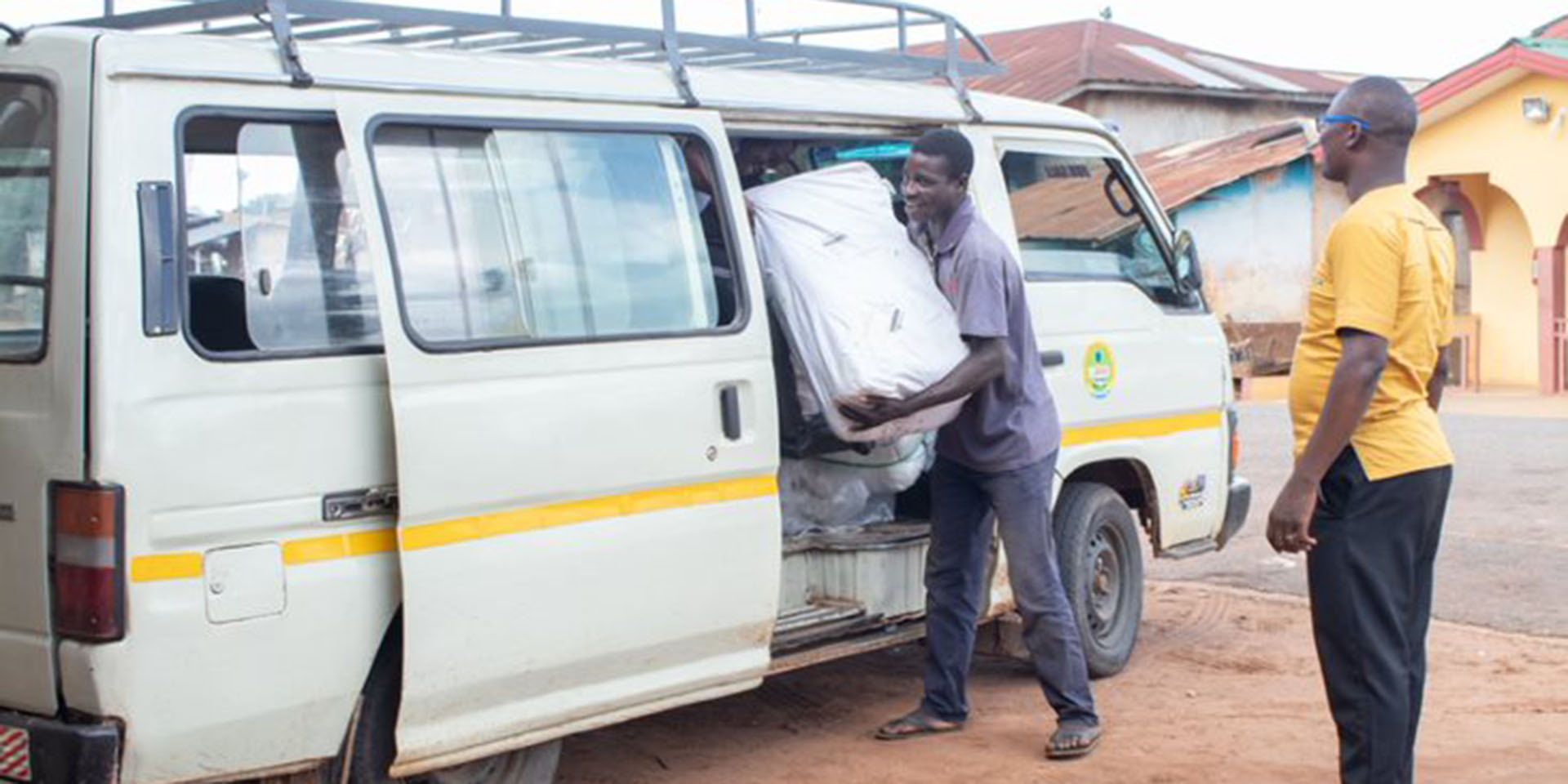 Malaria is on the rise. Since the onset of the COVID-19 pandemic, over-burdened health facilities, lockdown, and changes to transportation—such as new travel restrictions to deliver goods between countries and fewer flights and trucks making deliveries—have disrupted access for populations at high risk of malaria in many places from receiving health commodities such as nets, test kits, and treatments.

Octávio Longuenza is not one to shy away from tough jobs. He spends up to three months working underground in the diamond mines in Angola's Lunda-Sul Province, followed by three months above ground working other jobs, including as a driver to deliver malaria supplies to communities in Lunda-Sul. Octávio's willingness to get his hands dirty is a welcome trait for driving delivery trucks around Angola during the rainy malaria season.

In 2019, nearly 7 million Angolans contracted malaria, and 13.6 thousand died from this preventable and curable disease. In the 16 years since Angola became one of the first U.S. President's Malaria Initiative (PMI) focus countries, these numbers have seen steady improvement. In February 2021, heavy rains in Malanje and Lunda-Sul provinces in Angola left many health facilities cut off from the provincial warehouses in the middle of the malaria season, leaving them low on supplies. Many of the provinces' facilities are in remote areas. They don't have the infrastructure to store any more than three months' worth of malaria test kits, medicines, or long-lasting insecticide-treated nets (LLINS).

Under the coordination of the Provincial Malaria Control Program, with funding from PMI and in collaboration with the Municipal Directorates of Health, the USAID Global Health Supply Chain Program-Procurement and Supply Management (GHSC-PSM) project developed a plan to deliver the products to health facilities. The project first consulted regular road users and assessed which roads were washed out and which remained accessible, and ensured they had vehicles equipped with four-wheel drive and knowledgeable drivers to navigate what would undoubtedly be bumpy, muddy terrain. Having worked with Octávio in the past, the project knew his dynamic personality and collaborative nature would make him the perfect person for this rainy-day job.

Well-equipped pickup trucks from the provincial warehouses were determined to deliver the malaria supplies to the health facilities within 10 days. The trucks carried waterproof tarps for rainy driving, equipment to release the trucks from the mud if they got stuck, and food and water for the drivers as they traveled over long stretches of bad roads. Octávio and his fellow drivers would be carefully navigating roads with muddy potholes the size of small ponds. Even before their first delivery, the Lunda-Sul pickup truck could no longer resist the suction of the sticky red mud. Thankfully, the delivery team had anticipated this; they would have to get out and get their hands dirty. Octávio and the GHSC-PSM Malaria Technical Advisor Paulino Mbundo jumped into action by digging a path in front of each wheel, then laid wooden planks to help the truck regain traction. Three hours later, they were finally on their way again. 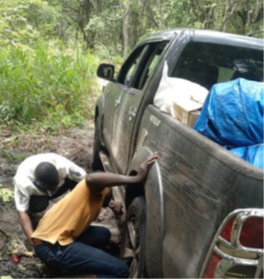 Octávio Longuenza and Paulino Mbundo dig their pick-up truck out of the mud in Lunda-sul Province, Angola.
Text
Expected weather delays continued to impact deliveries to the following 16 health facilities in Lunda-Sul. When Octávio and Paulino arrived at empty health facilities that had closed for the day, they knew they would be spending the night in the nearest town, watching over their precious cargo. Many health facilities are remote with limited phone connectivity, making communication challenging. They would simply show up to try the next day again. Despite these delays, the team finally completed their deliveries fourteen days after setting out.

Despite long days driving over rough roads, manual labor to keep the trucks on solid ground, and frequent rescheduling with health staff, Octávio and the rest of the delivery teams distributed all the malaria test kits, antimalarial medicines, and LLINs to 32 of 36 health facilities in Malanje Province and 45 of 59 health facilities in Lunda-Sul Province, improving the availability of antimalarial supplies and ensuring patients receive the care they need. Although the eighteen remaining facilities in these provinces remained inaccessible, GHSC-PSM coordinated additional deliveries a few weeks later to guarantee the availability of malaria commodities at these health facilities.
Quote
I am happy to know that patients are able to go to their consultation and have treatment for free. Muddy roads, holes everywhere, and rain does not matter. We all have a sense of happiness to see our duty accomplished, which is saving lives. - Délcio Alberto Fernando Serafim
GHSC-PSM, Provincial Malaria Supply Chain Advisor, Malanje

News ArticleUSAID partnering with Namibia to reduce HIV infections
June 26, 2022
Namibia has one of the highest HIV prevalence rates in the world but has experienced condom shortage in recent months. Condoms and other contraceptives are a priority for the Namibian government in preventing the spread of HIV. To support efforts by the Government of Namibia to address this…
News ArticlePharmacovigilance and Surveillance Training on Adverse Events post-COVID-19 Vaccination
June 16, 2022
The rapid uptake of COVID-19 vaccinations in Angola has brought an urgent need for monitoring the population after vaccination. To meet this need, the Angolan Ministry of Health (MOH) established post-vaccination surveillance sites at each vaccination point, providing assurance of active monitoring…
Success StoriesLesotho and Namibia Surpass Targets for HIV Control.
June 27, 2022
Lesotho and Namibia were announced recently as two of six African countries that have achieved HIV epidemic control. According to the findings, these two countries had high levels of viral suppression and retention in care, indicating effective treatment programs that reduce infection rates and…
END_OF_DOCUMENT_TOKEN_TO_BE_REPLACED
Twitter Embed